CHARLOTTE, Oct. 21 - The dead body of Simeon J. Cole of near Ainger or Olivet station was found Thursday afternoon in his buggy in the yard at the home of Myron Lampton, where the horse had stopped when it found it had no driver. Deputy Sheriff Carlton Gibson and Dr. McLennon of Bellevue decided it was a case of apoplexy. Mr. Cole was 70 years old and had been in poor health for sometime. 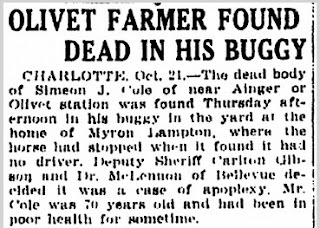 1. Sudden impairment of neurological function, especially that resulting from a cerebral hemorrhage; a stroke.
2. A sudden effusion of blood into an organ or tissue.
3. A fit of extreme anger; rage: "The proud . . . members suffered collective apoplexy, and this year they are out for blood" (David Finch).

Simeon J. Cole was the second husband of my 2nd great grandmother, Ella Odell Talbot Cole. Ella's first husband (my 2nd great grandfather) died in a fire in 1889, when their daughter (my Great Grandmother, Myrtle Talbot Bradley) was just 8 years old.  Ella then married Simeon J. Cole and they lived at "the Cole farm" where Myrtle was raised. Ella died in 1919 and is buried with her first husband at Bellevue (Riverside) Cemetery. Simeon is also buried there, alongside his first wife, Jenny Cooper Cole. He is also listed on the Cole Family marker at Spauding Cemetery, but he isn't buried there.

Pam, I've always been curious about Myrtle. She died before I was born & no one ever saild much about her. Grandad (Vern) was married to Cora & she was the only Grandma I knew. Any stories about Myrtle?