Grand Rapids, Mich
July 9 - 1964
Vern Bradley
Dear Friend
I was up to White Cloud last week saw Bernice Garfield she is having trouble by high blood pressure she said it was hard for her to write.
She said she had a letter from you wanting some information for your son about Sarah Elizabeth Pierce.
I am enclosing a sheet on her families also one on the Purdy Family. I wish your Son has time to check Thomas Purdy and family who came to America in 1836. I think he can get his information in London England.
Hope you and your family are all OK.
From Clarence J Phelps
1727 Silver Ave SE
Grand Rapids 7 Mich


My Grandmother, Gertrude M (Crain) Bradley, was the genealogist in the family and it appears as though she was researching her late Mother-in-law's  family in 1964. Kalamo was a small "close knit" community, so her Father-in-law (Vern Bradley) apparently knew where to find some cousins of his late wife, Myrtle Talbot.

They related the following:

Sarah Pierce, was born near Maidstone, Kent, England on May 13, 1825. Her maternal grandparents, who disapproved of their son-in-law's Irish heritage, took her when her mother died young. When Sarah was 7 years old, her father "kidnapped" her from the grandparents and brought her to America. They settled in Elmira, New York where Sarah was educated.


She married Reuben G. Strong in 1848 and they moved to Coldwater Michigan, where they remained until 1851.

"In 1851, Mr. Strong and his family started for Oregon by Overland Route with two yoke of oxen and wagons.  When they reached the Mississippi river, they were delayed with other emigrants by high water. Mr Strong left his family in Quest of work and during his absence was attacked by cholera.  His family never seeing him again.  Mrs. Strong disposed of her property .  She left the household goods to be shipped back east and the family returned to Coldwater Mich. but she never received the goods.

In 1855 moved to Kalamo Eaton Twp. Mich. and purchased a farm which Mrs. O'Dell owned at time of death. Mrs. O'dell drove with her five children in a one horse rung, Mr. O'Dell preceding them."


According to an LDS pedigree file, Reuben Strong died July 18, 1851. Reuben, Sarah, 7 year old Ruth A. (called Annette,) 3 year old Charles and little Rosetta, not even a year old, must have packed up and headed west in the late spring/early summer of 1851, starting out on the Chicago Road/Sauk Trail which went right through their town. I found several diaries from families going west from Michigan, and they seemed to cross the Mississippi River at various places from Warsaw IL to Galena IL.

I imagine the Strong family meant to claim 640 acres in Oregon under the "Donation Land Act" and traffic west was low in 1851 due to the outbreak of cholera, which was the leading cause of death on the trail.

What I can't imagine is Sarah heading back alone with 2 yoke of oxen, a couple of wagons and 3 very young children...

Other things I think:
Rev. Reuben Graham was an important person to the Strong family. Reuben Strong is listed as "Reuben C Strong," "Reuben G Strong," and "Reuben J Strong." His children's death records all list him as "Reuben G Strong," with Charles' record listing him as "Graham Strong." If his name was Reuben Graham Strong, I expect the Rev. Reuben Graham may have been an uncle, possibly related to Reuben's mother, Ruth. Also, Ruth Annette Strong was living with the Rev.and his wife Deborah (who had no children) in Branch Co. when she was 16 years old while her family was living in Kalamo, Eaton Co., MI.

A Baptist Minister at the time was a Rev. E. Loomis of the Home Mission Society, who was conducting services in Branch Co. just before Rev. Graham. The Rev. Loomis could have been related to Sarah's second husband, Jonah L O'dell, son of Eli and Abigail (Loomis) O'dell.

Things to do:
Visit the Holbrook Heritage Room at the Coldwater Michigan Library ! 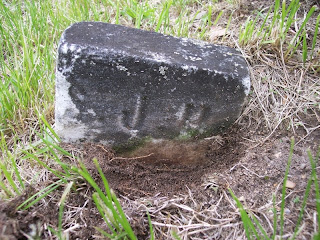 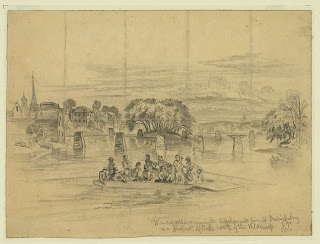 Wounded soldiers crossing the Rappahannock River at Fredericksburg on a flatboat--After the battle of the Wilderness ( Library of Congress Prints and Photographs Division Washington, D.C. 20540 USA)