Vern Bradley and the Walton Grange

I've been going through my Grandmother's stuff again and found this transcription from a Northwest Walton Grange ceremony, where my Great Grandfather, Verner J. Bradley would receive a gold pin. Unfortunately, I don't know who the speaker was, or the date of the event, but I did find a picture!

"Vern Bradley was born November 29, 1880.  His father and mother settled on the Bradley homestead.  They lived in a log house until the present one was built.  Vern had two brothers and two sisters.  He was a normal young man, pretty foxy with the girls; as he is today.

He ran away from a couple of girls and went  to Mississippi to work in a lumber camp for a winter, and came back an expert marksman and shot a wild turkey and has bragged a bout it ever since.

He married one of the girls he had run away from and she became his wife, (Myrtle Talbot).  They lived on Five Point Highway -- the Cole place.  They have four children.

Several months after the death of his first wife, he married Cora (Palmer) whom we all knew as an active and helpful Granger.
I’ve heard it said he has gained a great knowledge from the Northwest Walton Grange.  He has served in many offices.  He is our only “Charter Member”.
Politically minded over the years, he has been Township Supervisor a number of times.  He also served on the Board of Education.  He would hire teachers, and board them.
He was very sick and not expected to live, but through the efforts of that wonderful Doctor Quick he pulled through.
Another time, he was cutting wood with Werlin and while felling a tree, it kicked back and knocked Vern down, and Werlin loaded him in the trailer and brought him up the road so he could be taken to the hospital.  But, lucky, no bones broken.
Around 1910, he and Billy Harwood, learned to drive their first car.  By the book, of course, and a good thing too, as the first time they got in it, they had a little trouble controlling it and drove through the barn doors.  Another time a friend,  Hayes Horton, took them for a ride in a Stanley Steamer and had to climb under it to light the burner.  He and his brother were the first ones in the neighborhood to get a car.  It was an Oakland.  Gerald took it for a ride and drove it in the creek.  In later years, he has traveled to New York, Chicago, and California.  He gets on the Grand Trunk and goes to Port Huron and watches the boats.  He goes deer hunting and sets in a steam heated shack and lets somebody else get the deer for him.
Vern has lived a full and active life, and I know he’s good for a lot more.
He holds an executive job since his retirement from farming.  It is with his son-in-law, Ralph Vahs, at his Standard Station in Olivet.  He checks out the brooms, pushes them around and keeps the station swept clean.
In recognition of your faithful and untiring efforts in the Grange for the past 62 years, we wish to award you this Gold Pin." 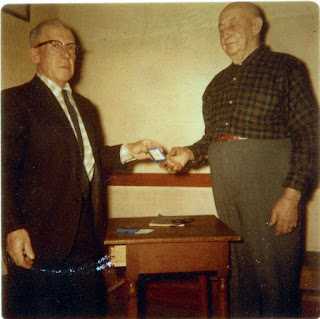 Vern Bradley (Right) receiving his gold pin
Foxy with the girls! I learned more than I knew about him.