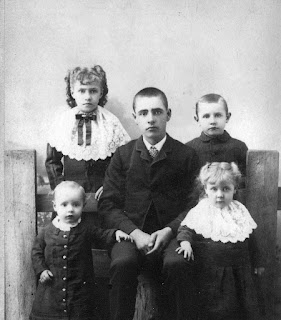 There's nothing like tromping through cemeteries in October. On our way up to Eaton County, my Mom called her cousin Richard and he met us at our first stop, Riverside Cemetery in Bellevue. He brought this picture, which we hadn't ever seen. These are the children of my 2nd great grandparents, Truman Uri Bradley and Sarah Blackmer. My Great Grandfather, Verner James, is the younger boy in the top right corner. The oldest boy is Emmon, the oldest girl (top left) is Lois Anna. The little boy (lower left) is Milton T.U. and the youngest daughter (lower right) is Hazel Amelia Bradley. Richard says there is a description on the back of the original and he'll let us know... but I would guess this to have been taken about 1888, the youngest about 2 years old and the oldest, 17. 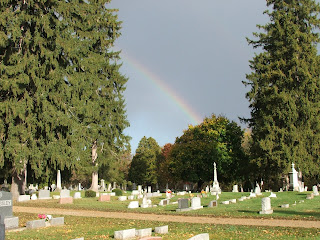 It started raining, got dark and windy for a short time, and then.. the rainbow! Even background music (Michigan State Fight Song!), provided by the Bellevue Middle School band, practicing just behind those trees.
My grandparents, Burlyn T. and Gertrude Crain Bradley are buried here.
Then, we headed up to Spaulding Cemetery. We were last there in 2001, and I was sad to see that my 3rd great grandparents' grave stones had fallen. 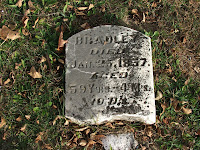 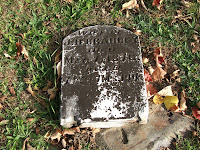 James Dickinson and Tirzah Lankton Bradley
Both of them, right next to each other. The others are intact, though.
Richard's wife (Ponja) called and wanted to meet for lunch. Her lunch break was 11:45 in Olivet. We weren't paying attention to the time! Richard had to call her and say we'd be a little late, ha.
So we ran over to Olivet and met her at the Eagles Nest Cafe on Main St. Good food and good company. She grabbed the "Regulars" table (table of knowledge, according to Richard) and several others joined us. It was one of those places where everyone knows your name.
At the cemetery, Richard saw familiar names since he lives there. He's says, "Oh, I know some O'dell's." I told him they were probably all his cousins. He was surprised!
We then went down the street to the Olivet City Cemetery where we have some family. Ira Dickinson Bradley (oldest son of James) and his family is buried there.
Richard's wife and son are also buried there. He went home from there. It was really fun to see him.
We wanted to get back and finish at Spaulding, but we went up to West Carmel first. Last time we were there, we couldn't find James' daughter, Mary H. Bradley Brooks Stewart.
She's the one who spent 18 years in prison for killing her husband, Simeon Brooks. She was pardoned, and married David Stewart. I felt bad about this grave site, too.
Mary's young daughter was ill and died. Then her husband got deathly ill and died within the same month. The woman must have been beside herself. Apparently, she was worried that maybe she gave him too much medicine and told somebody that. That person then reported her for murder. And it only got worse from there.
Her second husband is buried with his first wife, and Mary's grave is right next to that. It just says "Mary H." 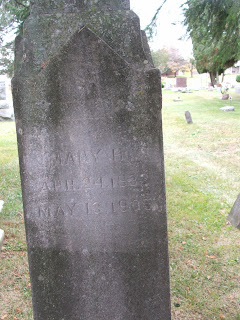 Sarah Blackmer Bradley's parents, James and Mary Ann Blackmer, and her siblings are also buried there.
When we left West Carmel, we wanted to drive by the old farm. It's right on 5 Point Hwy, just east of Lacey Lake Rd.
It was James D. Bradley's farm, left to Truman U, then Verner James Bradley. It was in the same family for over 100 years. When we saw it in 2001, it seemed in pretty bad shape. We didn't stop, but sometime we will. Now, in 2010, the outbuilding are gone and the farm house has been restored. It looks real nice!
We ended our day back at Spaulding. Since our last trip, we've discovered that James' niece was probably Lury Ann Woolcott who married Sylvester Day. They are all buried there, too, along with some other "Woolcutt's" that I need to check out.
Never Ending...

Hey Pam...Sounds like you had a fun day..I liked the rainbow picture. I really see a resemblence between my Dad and Emmon in the new picture. Poor Mary!!

Glad I got the link to you blog.

I am a direct relative to Sylvester Day from Eaton County, MI. I have inherited tons of family pictures and information. I am looking for other Day information and relatives. My father is Clifford Day, son of Keith Day, son of Clifford O, son of Sylvester Day. Bellvue and Charlotte Day's...I believe migrated from New York. dayhoward75@ gmail.com

Hello there, I came across this website while I was researching for Sylvester Day. I'm from California, my grandfather is Albert Charles Day (1926-), the great grandson of Albert C. Day who is the son of Sylvester Day from Eaton County Michigan. I know that my grandfather is from Michigan and I've been checking the census records to confirm my family's line. I'm interested in knowing more about the Day family and other relatives. My email is daylightk@hotmail.com. I look forward to a reply! -Kyle