Yesterday, I ran across a news story about a niece of my great grandmother. This morning, I have a little more information.

It looks like Rosa didn't escape her life in Lansing until she married Louis Flechner (b.1891 in Russia) on August 17, 1916 in Lansing.

Their first child, a daughter named Lillian, was born in Milwaukee Wisconsin in 1918. By 1930, the couple still lived in Milwaukee with 9 children.

Rosa made the news again on April 4, 1930 when her husband pointed a shotgun at her and threatened to kill her. She fled to a friend's home and reported the incident to police. Louis disappeared, but returned home several days later where he was arrested. No word (yet) on what happens next.

Rosa's family tended to make the news in the most unfortunate ways. In 1900, a child was injured by a horse: 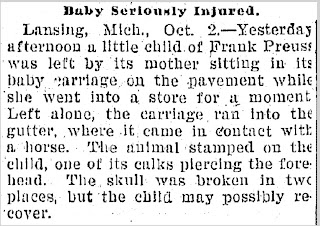 No word on which child this was. Rosa was 2 years old, so it actually could have been her. She had a 3 year old sister (Gertie, who died from appendicitis in 1906) and a baby brother (Charlie, who died several months earlier than this incident, from Cholera.)

Rosa's father, Frank, was a meat dealer in Lansing. In 1913, there was a crack down on violators of Michigan's new pure food laws and Frank was among those arrested. As an example, he was the only one sentenced to jail time:

Rosa's son, Emil, made the national news in 1957 when he filed for a divorce due to "mismanagement of his affairs." Apparently, his wife claimed to have been saving money by buying a chair for 37 cents, then spending 200 dollars to repair the chair. That must have been some "news of the weird" type story.

I don't know if Rosa ever managed to get out of going to school, but she at least saw a small part of the world outside of Lansing and certainly lead an eventful life!

Whew, it sounds like Rosa had a difficult life. I hope that some of her attempts to have fun and see the world worked out; and at least partially counterbalanced all of the bad times.