He Wooed her in a Prison - A Mary H. Bradley Brooks Stewart Story, Part 2 So, Judge Pratt was evidently able to correct his ommision. Mary is the only female listed, and likely the first female ever confined at the Jackson prison since they built the women's ward in 1856. The solitary cells were added in 1857. Since Michigan abolished the death penalty in 1847, the harshest sentence was life in solitary confinement. Also, in the 1862 annual report, the inspectors related their opinion of solitary confinement: In 1861, the law was modified so that the inspectors could, at their discrecion, release a prisoner from solitary confinement.

It appears that Mary was never actually put in solitary confinement, but assigned to work as a cook in the new women's prison. A prison officer related that they would not have executed the sentence, "that she was too good a woman for such a doom."

Mary's first "sweetheart," David Stewart, became a regular visitor to the prison. After several years, he became well known to the other prisoners and staff and became a "local tradition." David started a petition to secure a pardon, but that failed. Feeling hopeless and wishing for David's happiness, Mary implored him to marry another. Before 1860, David married Elizabeth, but continued to visit Mary, apparently with Elizabeth's blessing.


**Note: It seems that some journalists in the 1800's were just as prone to fact altering sensationalism as they are today! Ahh, the good old days! I'm assuming/hoping that the bottom line is true, otherwise, it would not have been a story. I've indicated the nonfactual parts with red text.

David Stewart showed up at the secret inquisition, volunteering information that Mary stole his arsenic. He wasn't the only one, though. Apparently, Van Arman thought Mr. Mann's  claim that she stole it from him was more credible. There is no indication that David actually testified. Also, Mary did not "Testify That She Poisoned Her Husband."

Since the death sentence was abolished in Michigan some 9 years prior, the "SENTENCE OF DEATH PRONOUNCE" ... false.

Her sentence was never "Commuted to Life," but it certainly seems true that "Later Stewart Had a Change of Heart!" 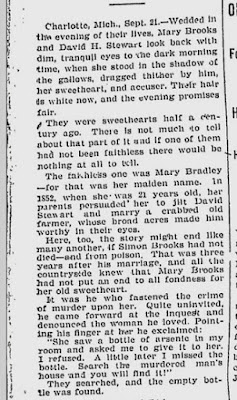 Charlotte, Mich., Sept. 21 - Wedded in the evening of their lives, Mary Brooks and David H. Stewart look back with dim, tranquil eyes to the dark morning time, when she stood in the shadow of the gallows, dragged thither by him, her sweetheart, and accuser. Their hair is white now, and the evening promises fair.
They were sweethearts half a century ago. There is not much to tell about that part of it and if one of them had not been faithless there would be nothing at all to tell.
The faithless one was Mary Bradley --for that was her maiden name. In 1852, when she was 21 years old, her parents persuaded her to jilt David Stewart and marry a crabbed old farmer, whose broad acres made him worthy in their eyes.
Here too, the story might end like many another, if Simon Brooks had not died, and from poison. That was three years after his marriage, and all the countryside knew that Mary Brooks had not put an end to all fondness for her old sweetheart.
It was he who fastened the crime of murder upon her. Quite uninvited, he came forward at the inquest and denounced the woman he loved. Pointing his finger at her he exclaimed:
"She saw a bottle of arsenic in my room and asked me to give it to her. I refused. A little later I missed the bottle. Search the murdered man's house and you will find it!"
They searched, and the empty bottle was found.


(as Van Arman said after the trial in part one, they never proved that Mary even had arsenic, let alone stolen arsenic. I would take that to mean that an empty bottle was not found.) 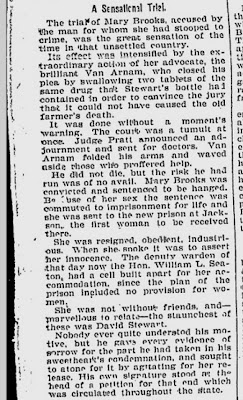 The trial of Mary Brooks, accused by the man for whom she had stooped to the crime, was the great sensation of the time in that unsettled country.
Its effect was intensified by the extraordinary action of her advocate, the brilliant Van Arman, who closed his plea by swallowing two tablets of the same drug that Stewart's bottle had contained in order to convince the jury that it could not have caused to old farmer's death.
It was done without a moment's warning. The court was a tumult at once. Judge Pratt announced an adjournment and sent for doctors. Van Arnam folded his arms and waved aside those who proffered help.
He did not die, but the risk he had run was of no avail. Mary Brooks was convicted and sentenced to be hanged.  Because of her sex the sentence was commuted to imprisonment for life, and she was sent to the new prison at Jackson, the first woman to be received there.
She was resigned, obedient, industrious. When she spoke it was to assert her innocence. The deputy warden of that day now the Hon. William L. Seaton, had a cell built apart for her accommodation since the plan of the prison included no provision for women.
She was not without friends, and --- marvelous to relate--- the staunchest of these was David Stewart.
Nobody ever quite understood his motive, but he gave every evidence of sorrow for the part he had taken in his sweetheart's condemnation and sought to atone for it by agitation for her release. His own signature stood as the head of a petition for that end which was circulated throughout the state.


(As noted earlier, although Van Arman was famous for "The Arsenic Incident," it didn't happen in this trial. Also, he was not her advocate, but the prosecuting attorney.) 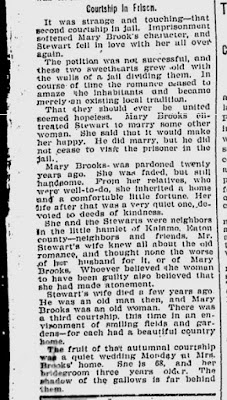 It was strange and touching--that second courtship in jail. Imprisonment softened Mary Brook's character, and Stewart fell in love with her all over again.
The petition was not successful, and these two sweethearts grew old with the walls of a jail dividing them. In course of time the romance ceased to amaze the inhabitants and became merely and existing local tradition.
That they should ever be united seemed hopeless. Mary Brooks entreated Stewart to marry some other woman. She said that it would make her happy. He did marry, but he did not cease to visit the prisoner in jail.
Mary Brooks was pardoned twenty years ago. She was faded but still handsome. From her relatives, who were well-to-do, she inherited a home and a comfortable little fortune. Her life after that was a very quiet one, devoted to deeds of kindness.
She and the Stewart's were neighbors in the little hamlet of Kalamo, Eaton county--neighbors and friends. Mr. Stewart's wife knew all about the old romance, and thought non the worse of her husband for it, or of Mary Brooks. Whoever believed the woman to have been guilty also believed that she had made atonement.
Stewart's wife died a few years ago. He was an old man then, and Mary Brooks was an old woman. There was a third courtship, this time in an environment of smiling fields and gardens--for each had a beautiful country home.
The fruit of that autumnal courtship was a quiet wedding Monday at Mrs. Brooks home. She is 68, and her bridegroom three years older. The shadow of the gallows is far behind them.

This article ran in "The News," Providence R.I. on September 21, 1899. A similar article, "Pardoned Murderess Weds, " ran in the New York Times on September 20, 1899, with mostly the same misinformation. My guess is that the story was picked up from a Charlotte newspaper, maybe relating the story upon David's death in 1899.

Interesting that the prosecuting attorney, John Van Arman, recommended the pardon. He previously stated that, had he defended her, she would not have been convicted. Even more interesting... "upon proof tending to show that some person other than the prisoner was the real instigator of the crime committed."  I REALLY wonder who that was! Especially, since it may have been a death bed confession!

Mary is enumerated in the home of her sister's family, LuryAnn and Archelaus Thornton, in the June 1870 Federal Census. Mary's Father, a farmer, died just a year after Mary's conviction. Her Mother, Tirzah, was still living on the farm, along with Tirzah's sister, Hannah Lankton, Mary's brother Truman, his wife, Sarah and several of their children. Her brothers Ira and Joe were also farmers, so between them all, they owned quite a bit of land, but wouldn't necessarily be "well-to-do." Mary probably did not "inherit a small fortune." It is possible that a separate home was built on her sister's land. They were neighbors of David and Elizabeth Stewart.

Elizabeth and David never had children and Elizabeth died on May 22, 1877, aged 57 years.

He was buried at West Carmel Cemetery alongside his first wife, Elizabeth.

In 1900, Mary was back living with her sister, Lury Bradley Thronton, nephew, Gilbert Thornton and his family. Mary died 4 years and 9 months after her husband, on May 13th, 1905, at age 73. She is buried alongside David and Elizabeth at West Carmel Cemetery.

*** Interesting notes: The official reporter on David's death record is Arthur J Day, the son of Lury Woolcutt Day, whom I suspect is Mary's cousin (still trying to prove that though.)

*** Other than the land transfers, there doesn't seem to be any more information about Simeon Brooks. He is not listed in any Eaton Co., Mi census and I can't find a death or burial record for him or his daughter Edith. The Bradley's were neighbors of a divorced woman, Tina Brooks, but I can't find a connection there. He may have been a relative of Nathan, Aaron or Silas Brooks who were early settlers in Kalamo. Mary's brother, Joseph, was married to Fannie Melissa Brooks, a daughter of Zimri Brooks and Grand-daughter of Silas Brooks.

Just recently, I ran across a note in my Grandmother's stuff, but she didn't seem to pursue the story. I wonder why... 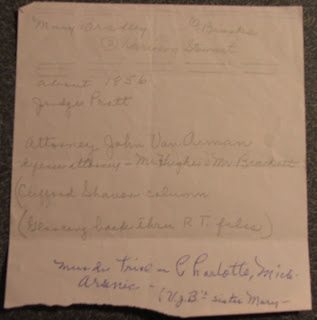 Very interesting aricle and well written. Thanks for all your research Pam.
Mom

Whew, what a story! I sat on the edge of my seat the entire time that I was reading it. Great research and well-written--It's absolutely amazing that they eventually married after all of those years.